Good news on the railway for a change

Crime is falling, according to a recent report from the transport police. One trusts that travellers on late-night trains on the Valley Lines now feel safer.
Posted by Frank Little at 10:11 No comments:

Sad that the Liberal Democrat party slipped a few per cent from its general election share of the vote. It was clearly no fault of our very good candidate. Rather, the electorate wanted to give Labour a good kicking, and the Conservative was the most obvious means of doing so.

That the vote was anti-Labour, rather than pro-Conservative, was illustrated by a post-election interview on Radio 4. Taxed with the Conservatives' lack of economic policy to set against Labour's, their spokesperson could only come up with "raising the inheritance tax threshhold". She didn't have the grace to mention that Vince Cable had thought of this first. (And it's hardly our most important tax policy, in my opinion.)

One other thing was illustrated by the campaign, and the media treatment of it: that old-fashioned class consciousness is dead. My grandmother's generation would not have been deceived into thinking that Timpson is a "toff"; as the scion of a successful shoe-salesman, he is strictly "trade".

For somewhat more incisive analysis, see The People's Republic of Mortimer.
Posted by Frank Little at 00:52 No comments: 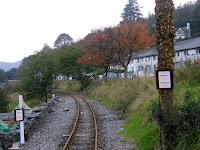 Peter Black raises BBC-2's treatment of Welsh matters on last Friday's "Question Time". He quotes chairman David Dimbleby as saying: “I don’t want to go into Welsh Assembly issues as it won’t be understood outside Wales”.

However, this consideration does not apply to Scottish independence. When Wendy Alexander, leader of the Scottish Labour Party, tried to out-PR Nationalist Alex Salmond on the issue, the BBC did not shrink from giving it prominence on its discussion programmes.

The difference is, of course, that this story discomfited Labour, and, for the BBC, the Labour-Conservative battle is the only story in town. A further example is the abandonment of fairness in Radio 4's "Westminster Hour" last Sunday, when LibDem Lynne Featherstone was not allowed her usual contribution to the regular political discussion.

True, Lynne was on the previous Friday's "Any Questions?". However, there was no LibDem politician on the Cardiff "Question Time" panel, the last before the Crewe and Nantwich by-election.
Posted by Frank Little at 11:59 1 comment:

I was struck by the non sequitur "There were several prominent performances" after the reference to the freezing weather - then I realised it was a picture caption.
Posted by Frank Little at 11:20 No comments:

Professor Reid was optimistic on BBC Radio Wales this morning that his report would be acted upon by the Assembly Government.

It certainly needs to be taken seriously. There has been too much emphasis on processing academic high-fliers in recent years, perhaps because it is easier to measure exam success. Not enough attention has been paid to a main original aim of universal education, of equipping each individual to take his or her place in modern society. Moreover, though the importance of pre-teen education has long been recognised by social scientists, politicians have been slow to catch up.
Posted by Frank Little at 10:27 No comments:

One of the pioneering photo-journalists, her name has rather been overlooked among those of Cartier-Bresson, Capa and others. I would not have realised her significance if it had not been for the Oxford DNB mailing list, which led me to this entry.
Posted by Frank Little at 09:32 No comments:

It's when, in "The Man who would be King", Sean Connery, as Danny Dravot, the adventurer playing god, is bitten by Shakira Caine, the wife of his co-star Michael - Freudian overtones, there - and is seen to lose blood. The girl (named Roxanne in the film, but anonymous in the Kipling original) has been selected by the priests as the queen demanded by the god-king to keep him warm during the winter months and to provide a king's son, but she is frightened. At his first embrace, she panics.

Kipling writes: "‘The slut’s bitten me!’ says he, clapping his hand to his neck, and, sure enough, his hand was red with blood [...] while the priests howls in their lingo,—‘Neither god nor devil but a man!’".

After that, the game is up, and the adventurers lose their hold over the tribe. Dravot is beheaded and his henchman barely escapes with his life to tell the tale.

For Margaret Thatcher, the moment when people realised that she was neither god, nor devil, but a woman, came during the resignation speech of Port Talbot boy, Sir Geoffrey Howe. It was not so much the resignation, nor the contents of the speech but the fact that the whole of the back-benches found itself able to laugh with him and at her, which made her appear fallible.

Gordon Brown's Shakira moment was his abandonment of the 2007 autumn election. Up until then, he had been the inevitable successor to Tony Blair, the "greatest chancellor of the exchequer we ever had" according to one idolatrous Labour MP.

Embarking on the election plan was like Dravot's scheme for marriage, a tactic too far. It must have looked tempting: use the honeymoon period enjoyed by a new leader to renew Labour's mandate for another four or five years, carrying the party over the rocky financial period Brown could see coming. The gloss was beginning to come off the Cameron leadership, and electoral defeat might see yet more blood-letting in the Tory party.

Reality must have bitten with the latest private polling for the Labour party. At that stage, I believe that they did not show a Conservative lead. Rather, they would have pointed to a Labour victory, but with a majority so small that Brown would have been as dependent as Callaghan on other parties to stay in power in the face of the inevitable revolts by members of his own party.

The retreat was almost as bad. All of a sudden, David Cameron was validated. Brown's misjudgements as chancellor, like auctioning gold at the bottom of the market, were recalled. After years of being kept in the shadows because of his pro-EU views, Ken Clarke was allowed by the Tories to come forward and claim credit for the economic miracle of Labour's early years.

There are signs that the credit drought in the US is ending. Sir Menzies Campbell, on "Question Time", opined that the improvement in the domestic credit market would be felt over here before the next election. So Labour's stock may rise from the lows hit during the 2008 local elections, but the party - in spite of its history of reluctance to behead the leadership - will hope to go into the next election with a new god-king.
Posted by Frank Little at 08:10 No comments:

- which concerns the government and the Tory front bench.

Chris Huhne describes drugs policy as a shambles. Commenting on the decision by the Association of Chief Police Officers to continue their current policy of ‘confiscate and warn’ on cannabis despite Jacqui Smith, prompted by Gordon Brown, deciding to reclassify it to a class B drug, the Liberal Democrat Shadow Home Secretary said:

“The Government’s drugs policy is now in a shambles as senior police officers take scientific advice more seriously than ministers.

“Gordon Brown should have followed the recommendations of the advisory council on the misuse of drugs, as that was the only evidence-based course open to him.”

It is odd that the government should single out this one recommendation of the advisory council, the one that made the headlines, to reject, while accepting all the others.

Is it too much to ask for some consistency on drugs policy? Alcohol, which arguably does more harm than cannabis, is very widely available. There is little more control on alcopops, the skunk of the drinks trade, than on the rest of alcoholic drinks.

LibDem MP Tom Brake reported today (on Radio 4's "World at One") that a shop round the corner from a school in his constituency openly displayed hemp leaves in its window, without any action being taken against it.
Posted by Frank Little at 13:14 1 comment:

Thanks to Asthma UK (which I thoroughly recommend fellow-sufferers and, especially, parents of children with asthma, to join), here is a link to the official asthma blog.

This coming Tuesday is World Asthma Day. Sadly, this has not received much attention in the local media this year, so I'm doing my bit to publicise the Welsh contribution.

"Recommendations by Asthma UK Cymru will be highlighted at a reception at the Senedd between 8am - 2pm on World Asthma Day sponsored by Jenny Randerson, Assembly Member, Health Spokesperson for the Welsh Liberal Democrats. We are urging Assembly Members, people with asthma, parents of children with asthma and the general public to come along during the day and lend their support to the campaign by signing our Pledge Board which calls for better services for people with asthma in Wales.

"At 1pm they will be joined by children from local early years and primary schools whose carers and teachers have benefited from Asthma UK Cymru’s Alert to Asthma education programme, and in the evening Caernarfon and Caerphilly castles will be lit up in lime green – our brand colour, from 8pm. "
Posted by Frank Little at 10:04 1 comment:

Generous story in the Western Mail, which too often reads as if the Cardiff parish magazine.
Posted by Frank Little at 09:41 No comments:

Now that the smoke is clearing from yesterday's hostilities, and assuming that the remaining skirmishes tell the same story, it is clear that the Conservatives are the big gainers in England, and that Liberal Democrats have done best in Wales.

Both here and in England LibDems are now the second party. Much was made by the BBC people of the fall in the overall percentage of the Liberal Democrat vote. What they failed to pick up was that local elections seem to have fallen into the same pattern of tactical voting as national ones - where LibDems have been in control, or are the most likely to assume control, then voters have gone LibDem; otherwise, voters have been ruthless in selecting another party (so long as it's not Labour).

I would also expect the fact of being the second party to make an impact on future results, so that the LibDem share will probably go up again (at the expense of Labour) as the news sinks in to the consciousness of the electorate.

Plaid must be disappointed at their showing, which is surely linked to their being in coalition with Labour in Cardiff Bay. Perhaps if the three-party alliance had gone ahead last year, freezing Labour out of Welsh government, they might have done rather better at local level.

Labour may justifiably blame their fall on the economic misjudgements of the national leader. The doubling of the lowest income tax rate undoubtedly played a big part in causing defections from Labour, especially in Wales where more people proportionately fall into the category of losers. However, voters also saw the other faults of New Labour nationally - their taking the electorate for granted, their concentration on the centre to the detriment of local communities, the addiction to PR gesture rather than action - reflected in the party's behaviour locally.

If Labour does not renew itself, nor remember its traditional values, it will continue to fall.
Posted by Frank Little at 08:38 6 comments: