Congratulations to Kumar Sangakkara on finally scoring a test hundred in England, and at a crucial time for his country. It may well be his first first-class ton in England, but he has of course made one in Wales, in a rain-curtailed match at Sophia Gardens on a previous tour.

He went up in my estimation when I read about his leisure reading in an interview conducted when England last toured Sri Lanka. While most England players would regard Dan Brown as high-brow reading, Sangakkara was catching up on Oscar Wilde.
Posted by Frank Little at 15:18 No comments:

So Debbie Reynolds is having to sell off her intended museum collection of costumes? It's a sad reflection on Hollywood that it has no concern for its history.

The headline to the story in most of the media over here centres on the simple ivory-white outfit worn by Marilyn Monroe as the "girl upstairs" in "The Seven Year Itch" (1955).  Incidentally, I believe the Independent has it wrong when it says that Monroe's dress is blown up by steam. As I remember it, the grid over which she stands covers a ventilation shaft for the New York subway, and she uses the draft from passing trains to cool down in the hot summer which is the background to the film. imdb does not record that particular section of dialogue, but it does have this:


The Girl: When it gets hot like this, you know what I do? I keep my undies in the icebox!


I don't suppose the undies are in the Debbie Reynolds sale, though.
Posted by Frank Little at 14:21 1 comment:

The Liberal Democrats are a bottom-up party

The custom of pre-releasing speeches to the media worked to Vince Cable's disadvantage this week. The BBC picked out the most inflammatory part of what he was going to tell the GMB union, that there were hard-liners in the coalition who were itching to tighten up TU legislation given an excuse, and trailed it on virtually every news bulletin leading up to the congress. Consequently, the boo-boys were prepared and duly featured on news reports thereafter.

However, as Jonathan Calder points out, there were positive aspects to the speech. One was the recollection that Vince had worked on legislation on worker participation, a long-held Liberal principle, while he was in the Labour Party and an assistant to John Smith. Several things struck me about this passage. John Smith was clearly sold on the German model, which was more social democratic than socialist. If he had lived, would a Smith government in 1997 have revived the plans? Secondly, it is interesting that Vince should have brought the subject up in front of a trade union audience now. It strikes me that co-ownership and schemes involving workers on management boards are disliked by full-time union officials, because they could be a threat to their livelihoods or to the political ambitions of the ideologically-driven people. It looks as if Vince was going over the heads of the officials to the activists on the shop floor.

It is unlikely that workplace democracy is going to feature in the immediate future plans of Labour, ever more dependent on union money. The Conservatives have in the past encouraged wider share ownership, but that is not the same thing. David Cameron has gone further in speaking up for worker co-ops - but only in the public sector, as part of his Big Society. It is up to the Liberal Democrats to see the policy through in industry as a whole.
Posted by Frank Little at 01:52 No comments: 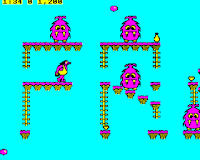 When I first heard the word "frack" the image of a vintage computer game arose. However, bad puns apart, the concept is more serious, as Peter Black's news release makes clear. There is a description of the process, which breaks up shale to release methane, in yesterday's Independent.

Peter draws attention to an application to frack in Maesteg, but Centrica are also considering extracting methane from the area of Cilfrew. (Application P2010/0382 refers) Centrica has published a Q&A as a pdf here, which should perhaps be read in conjunction with today's Indy. It is reported that New York state's Attorney-General has filed a lawsuit against the US federal government for failing to carry out an environmental risk assessment of fracking.
Posted by Frank Little at 20:39 No comments: