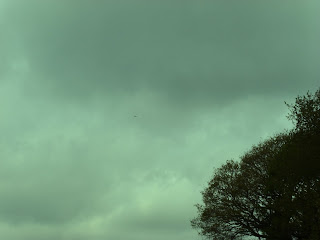 They say that you shouldn't go back, but for me the rewards have usually outweighed the disappointments. I am writing this in Cobden's Hotel in Capel Curig, to which I have returned as a birthday treat to myself. Fifty years ago, a Sunday treat would be an outing in Uncle Albert's Austin, later replaced by a new (and ugly) Morris Oxford. Destinations included the Marches, but most often we would travel to Capel Curig, because of a connection between my aunt Betty and the daughter and granddaughters of the artist Alfred Oliver, who had a studio here.

Alfred Oliver was one of the last Victorian and Edwardian naturalistic painters. Some idea of his style can be gained from a story told in the family. Apparently, when his "The Snowdon Horseshoe from Lyn Mymbyr", showing the mountains perfectly reflected in the lake, was exhibited in London, a critic complained that the image was impossible. Oliver's response was to invite the critic up to Capel, and on the first clear morning of his visit, to row him out on the lake and demonstrate how accurate the picture was.

(Meanwhile, on the other side of Moel Siabod, JD Innes and Augustus John were taking landscape painting in an entirely different direction.)
My own appreciation of Alfred Oliver's skill came from a painting of a single tree - a silver birch, if I recall correctly. It hung at the western end of the studio. In the half-light, and against the dark wooden background, it was almost as if a door opened into a wood.

The only other memory of the studio was a poignant one. Above a door at the back was mounted a twin-bladed propeller. I was told that it was a memorial for his son, killed in action in the first world war. Probably he was the T.A.Oliver cited in a Roll of Honour from 1917.

I can't find the studio, or even where it stood. The family (Humphries? Humphreys?) sold it around 1980, and it has probably been redeveloped as a guest house.

However, the sheep tracks which I used to wander and the view from the lake are virtually unchanged. If only the cloud would break so that I could capture the latter image.
Posted by Frank Little at 09:56 9 comments:

With God on his side

After the initial fears for family and friends in Norway were dispelled, the same thought occurred to me as to so many others: how could the mass slaughter occur in such a civilised country? Norway was the nation that brokered international peace negotiations and is always among the first to provide peacekeeping troops.

As the profile of the perpetrator was built up by the news media, a phrase came to the fore: "Christian fundamentalist". But as if to prove that fundamentalism was as alien to Christianity as "militant" Islam is to the general population of Muslims, the earliest messages I saw on Facebook were from friends who are committed Christians, praying for the victims and their families.

There was, however, a Norwegian precedent. "The dutiful eldest son of a scholarly country parson, with a close sense of family and place", to quote from this essay,  in the 1920s "assisted in relief work in Russia under the famous Arctic explorer and humanitarian Fridtjof Nansen and later for the League of Nations" (Encyclopaedia Britannica). He believed passionately in Christianity informed by science as a bulwark against international communism. His name was Vidkun Quisling. He was later responsible for sending nearly a thousand Jews from Norway to die in the camps in Nazi-controlled Europe.

We only have the judge's summary of what Anders Breivik told the court today. Probably wisely, Breivik was denied a public hearing in which to launch a justification of his actions. However, he seems to have railed against Muslims and Marxists, eerily reminiscent of the Nazis' equation of communism with international Jewry, something to which Quisling clearly subscribed.

The Utoya atrocity is not going to be forgotten, but it was reassuring to hear a Norwegian government spokesman say today that, although security will have to be improved, it is not going to turn Norway into a closed society.
Posted by Frank Little at 19:34 No comments:

Murdoch's US empire may be tainted, too

It seems that suspicions that the dubious investigative tactics employed by the British press were also taken up on the other side of the Atlantic are being confirmed:
http://www.smh.com.au/world/black-ops-and-espionage-inside-fox-news-20110721-1hpkn.html
Posted by Frank Little at 12:52 No comments:

Newspapers and the Nationalists

Thanks to Caron's Musings, I have become acquainted with a blog named The Steamie. (The "steamie" is the affectionate Scottish name for the launderette, presumably transferred from the earlier steam laundry. In both cases, wee wifeys would no doubt pass the time in gossip while waiting for their washing to be ready.) This particular item concerns Alex Salmond's relationship with News International. The SNP leader's career has been marked by success in public relations, both north and south of the border, and by shmoosing powerful business leaders. It would be natural for him to be close to Murdoch on both scores. It will be interesting to see whether this afternoon's grilling of the Murdochs touches on Scottish matters.

There is no such difficulty for Plaid. There was a time when the Conservative-supporting group which owned the Western Mail steered that paper towards PC, presumably on the principle that "my enemy's enemy is my friend", Labour being the main enemy and the Conservatives in Wales being insignificant electorally. That seems to have changed with a degree of proportionality in voting for the Assembly, leading to the current position where the Welsh Conservatives are the main opposition in Cardiff.
Posted by Frank Little at 15:06 1 comment:

"My criminal is scummier than your criminal" - inside Rebekah's newsroom

On the eve of Rebekah Brooks's appearance before a parliamentary committee, Reuter has published an article based on (unnamed) journalists' experiences of working on the News of the World after she had taken over.

Journalists who worked there in that period describe an industrialised operation of dubious information gathering, reporters under intense pressure attempting to land exclusive stories by whatever means necessary, and a culture of fear, cynicism, gallows humour and fierce internal competition.

"We used to talk to career criminals all the time. They were our sources," says another former reporter from the paper who also worked for Rupert Murdoch's daily tabloid, The Sun.

"It was a macho thing: 'My contact is scummier than your contact.' It was a case of: 'Mine's a murderer!' On the plus side, we always had a resident pet nutter around in case anything went wrong."


A more complete version is at: http://www.smh.com.au/world/inside-rebekah-brookss-newsroom-the-dark-arts-of--dodgy-business-hq-20110719-1hmcz.html#ixzz1SXqKE000
Posted by Frank Little at 11:24 No comments:

I'm surprised that there hasn't been more instant reaction to the Hain/Jones proposal to elect two AMs from each Welsh constituency on the new Westminster boundaries, scrapping the top-up list. One might have expected Mr Hain, who has long supported the Alternative Vote, to incorporate preferential voting in his proposition, but no: he wants to use simple crosses, as for council elections. Even though Liberal Democrats could expect to do rather better from this than the other two opposition parties, I hope there will be a robust response from the leadership, restating the party's belief in STV, the closest practical approach to a proportional voting system.
.
Posted by Frank Little at 00:41 2 comments:

Some time ago, I speculated that there had been a pause in global warming over the last decade because of unusually low solar activity. It appears there was another factor. Michael McCarthy reported in the Indy yesterday:

The great paradox of the Noughties was that, as the climate science became clearer, and the political engagement with it became greater, actual manifestations of warming seemed, to ordinary people anyway, to get fewer and fewer.
Now, thanks to a study by Robert Kaufman of Boston University and others, just published in Proceedings of the National Academy of Sciences , we know why. The colossal, explosive surge in industrial expansion in China during the Noughties, powered by burning coal in power stations, which turned the Chinese into the world biggest CO2 emitters, did not just emit carbon, it emitted vast quantities of sulphur as well; and the consequent sulphur aerosol has cooled the world's climate, just like Pinatubo did except for longer, cancelling out the warming effects of the increased CO2.

The Chinese are moving rapidly to more sustainable means of power generation, and the growing influence of public opinion may force the authorities to curb the burning of low-grade coal. So Kaufman's theory may soon be put to the test.
Posted by Frank Little at 14:43 No comments:

Afghanistan: a day when good news may be buried

Obviously the coverage of today's business in the House of Commons in this evening's and tomorrow's media will be dominated by the emergency debate on the intrusion on privacy by the press. However, there was an important statement by the Prime Minister just after his question time on the withdrawal from Afghanistan.

It is not so much the withdrawal itself that I want to praise, but the optimism for the future of the country which Mr Cameron expressed. He emphasised our continuing role in maintaining a staff college, something which President Karzai had specifically requested, and which the UK has a good reputation for. He also said that there were good prospects for the economy, because of fertile land and rich mineral resources. He stressed the importance of building roads which would enable Afghans to bring legal produce to market and not leave them in the hands of the opium poppy barons.

On this latter point, there is surely still a case for licensing poppy production for the production of medical opiates in addition to the growing of wheat. This would speed the introduction of foreign exchange into the economy, given the existing expertise of Afghan farmers in raising poppy and the lead times in conversion to food crops. Nevertheless, the inflation in world wheat prices, exacerbated by the disastrous fires in Russia last year, while bad news for us in the West, could not have come at a better time for Afghanistan.

Sadly, it was not until forty minutes into the debate on the statement that the future of women in the new Afghanistan was raised. Anne Clwyd, the Labour member for Cynon Valley, expressed her concerns and she was joined later by LibDem Stephen Gilbert and the Conservative Mary Macleod. I have the simple though perhaps naive view that, for whatever reasons we invade another country, we should not leave it in a worse state than which we found it. We should have learned our lessons from Iraq where religion-fuelled violence has increased and the position of women has declined since the elimination of Saddam and the Ba'ath regime. It was somewhat reassuring to hear the Prime Minister restate that, if the Taliban were to come back into the Afghan fold, they would have to sign up to the existing national constitution.
Posted by Frank Little at 14:04 No comments: