I've always been suspicious of fast growth in the economy, mindful of the saw: "up like a rocket, and down like the stick". However, I am heartened by evidence reinforcing the feeling that UK recovery is under way. In this Reuters report, the Engineering Employers Federation is quoted: "the recovery appeared steadier than that after past recessions". My own indicator is the number, and type, of jobs coming up on the contract market. There has been an increase in requirements for developers and planners, which has held steady so far this year. This does suggest a confidence in the UK economy, in spite of various warnings, like the EEF's: "that future growth could not be guaranteed."

The absence of Web comment from Labour is puzzling. Surely they cannot have been wrongfooted by the unexpected rise in GDP? Perhaps they are saving their ammunition for prime minister's questions tomorrow. Certainly, they would be ill-advised to point to the low activity in the housing market as a sign of economic ill-health, as the shadow chancellor's first response on radio today implied. It was the over-dependence on the private housing sector which was the undoing of Ireland and Spain.


Labour is probably pinning its hopes on a domestic recession in the first quarter of next year as a result of the VAT increase. They should also note that this is also the period when the first of a series of rises in the personal tax allowance occurs, putting more money into many pay-packets. No doubt Conservative and Liberal Democrat spinmeisters are filing away every prediction of disaster on the part of opposition speakers. 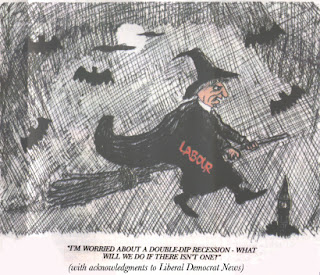