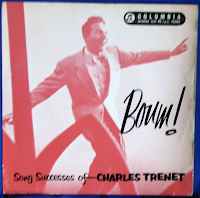 If it hadn't been for Russell Davies's Song Show on Sunday, I wouldn't have realised that the centenary of Charles Trenet fell this month. It is a remarkable sign of the way we in the UK have turned our back on continental Europe that while the French media are going overboard in celebrating one of the 20th century's greatest singer-songwriters, there is hardly a ripple over here. Yet I can recall in the 1950s that Trenet and Jean Sablon rubbed shoulders on record programmes with the likes of Anne Shelton, Vera Lynn, Bing Crosby and Danny Kaye. Even Trenet's equivocal relationship with the Nazi occupiers did not overshadow his popularity after the Second World War, a tribute to the quality of his writing.

The Song Show closed with the magical La Mer, in Trenet's own hit version. The melody itself was strong enough to survive the ministrations of Bobby Darin and others, but here it is enhanced by one of the greatest arrangements in popular music history, by the orchestra director Albert Lasry. (I see that most references cite Lasry as the composer as well, but the Columbia issue of the recording credits him only as the arranger.) I would put it up there with Gordon Jenkins' setting of The Folks Who Live on the Hill for Peggy Lee. Steve Martin was wise to set the balletic opening of L.A. Story to the Trenet/Lasry original rather than any of the later anglicisations.
Posted by Frank Little at 11:52