Feedback is off the air, so I shall have to complain here 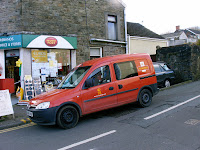 The BBC is getting more partisan. Not content with broadcasting only Europhobic opinions of the current siege of the euro zone, it has started a series on the Royal Mail by a clearly biased Dominic Sandbrook. In a contribution to the Daily Mail headed: "The last post: The shameful betrayal of the Royal Mail", he states:

"it is notable that Margaret Thatcher never seriously considered privatising it. Like most people of her generation, she saw Royal Mail as one of the bulwarks of the British state — an institution of which the nation could be proud.

"All this was to change, however, when Tony Blair arrived on the scene in 1997."


He conveniently glosses over the move to privatisation and the massive post office closure programme started by John Major and continued under Blair/Brown. It is no surprise therefore that Sandbrook implies in the radio broadcast that the closures started much later. "Since 2008, both Labour and coalition governments closed hundreds of post offices," he asserts (my italics). In fact, one of the first statements of principle by Liberal Democrat Ed Davey on taking office in the business ministry was that there would be no new post office closures, and he has clearly stuck to that.

If he is wrong on the fact of the closures, can we trust his other assertions? In fact, should not Sandbrook be described as a "political commentator" rather than a "historian"?
Posted by Frank Little at 14:43

Wasn't part of the Libdems Manifesto at the last election to sell 49% of the Royal Mail?

Yes, money would go back from this to the post offices.

To reinforce the point made in the main posting, please see http://www.telegraph.co.uk/news/uknews/royal-mail/8118013/Ed-Davey-My-plans-to-revive-the-post-office.html.