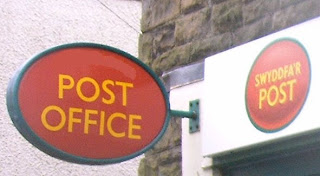 Yesterday, in the House of Commons, our two local MPs voted against this motion:

"That this House regrets the proposal to close up to 2,500 post offices; recognises the vital role post offices play in local communities; notes the concern and unpopularity amongst the general public of closing such a large portion of the network; has concerns that the access criteria laid down for the closures consultation do not adequately take into account local geographical factors and public transport networks; is concerned that the consultation period is only for six weeks rather than three months, as recommended by Cabinet Office guidelines; believes that post offices must move with the times in the services they offer and that options for business expansion and developing business opportunities with local authorities should be explored further; and calls upon the Secretary of State for Business, Enterprise and Regulatory Reform to instruct Post Office Limited to suspend the compulsory closure of sub-post offices while these issues are re-assessed."

(I am grateful to Peter Black to this link to the vote list.)

It will be noted that the motion makes no party points, even though it was moved by a Conservative. It is particularly surprising that Dr Francis, MP for Aberavon, otherwise such a champion of local sustainability, should vote against a motion which strikes a blow for communities.

Later: Peter Black has pointed out that Paul Flynn, another advocate of localism, also voted against the motion. His rationale is here.
Posted by Frank Little at 23:37