I have recently received and returned a questionnaire about my experience as a candidate in the last election. A significant part of the study concentrates on what level of abuse candidates had experienced during the campaign. I was pleased to report that I was not aware of any, though perhaps I was not seen as high-profile in a very polarised campaign. A chance remark from the Conservative (female) candidate after the count suggested that this was not the case with the front-runners and Labour's Christina Rees has certainly attracted some nasty comments on social media even before the election.

Another way of avoiding anonymous abuse is not to use Twitter, which seems to encourage such garbage by its very nature. Sheffield University and Buzzfeed have recently completed an exhaustive analysis of tweets received by politicians over the month leading up to the 2017 general election. (Thanks to Guido Fawkes for publicising this.) The reassuring thing is that even in the worst case (Conservative men), less than 6% of Twitter traffic was abusive, and in the case of female Greens and Liberal Democrats, less than 1%. This is still too much, though, especially as some of the language used is obnoxious, and the government is right to hold an inquiry.

Another finding is that race is clearly a motivator: 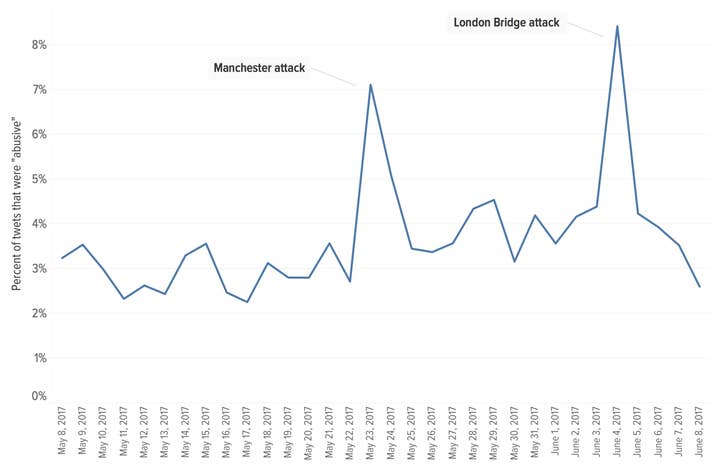 It is well worth reading the whole article and its other well-chosen graphs.