From claret to cake and giggles

For some time, I have been meaning to moan about how key figures in the cricket broadcasting of my youth have been written out of the TMS record. In particular, Roy Webber, Arthur Wrigley and Jack Price who virtually invented the art of scoring for TV and radio (though later practitioners may have reinvented it), are forgotten men. I was an admirer of Webber's successor, Bill Frindall, who died too soon, but wonder if Webber and Wrigley would be better known today if they had been encouraged to speak on air as often as Frindall.

Roy Webber and Brian Johnston produced the first "Armchair Cricket" in 1955/56, mainly for the benefit of TV viewers. (I recall the radio team as Alston and Arlott, supplemented by regional commentators such as Robert Hudson and Alan Gibson, backed up by Wrigley.) Later volumes in 1966 and 1968, edited by Johnston alone, provided more background to the radio coverage, which had gone ball-by-ball. Webber also founded, with radio producer Michael Tuke-Hastings, the International Cricket Broadcasters' Club. 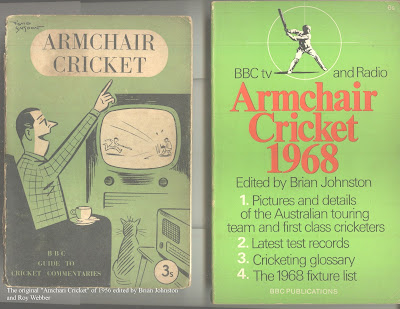 What sparked today's posting was the article in next week's Radio Times celebrating fifty years of Test Match Special which celebrates the camp side of BBC's cricket coverage. Brian Johnston, who was apparently "demoted" from TV to radio for not being technical enough, has a lot to answer for in that the obsession with cake and trivia arrived with him. However, Johnston was by all accounts a decent club cricketer and he never let the lighter side of the commentary box interfere with description of the play. (Apart from the infamous "legover" incident which, in spite of Jonathan Agnew's protestations to the contrary, I am convinced was planned to undermine Johnston.)

The RT dismissal of Arlott as "well-fuelled and of a literary bent" was particularly annoying. Certainly, Arlott had become a connoisseur of claret (and had been a producer of poetry broadcasts for the BBC Overseas Service) which he was known to indulge in during the working day, but he never let a drink impair the standard of his commentaries. In the last years of his career, he could be late for his turn at the microphone but this was as likely to have been by being waylayed by friends or admirers on his way back to the box as by staying too long at his refreshment.

While Arlott never quite made it to the international stage as Agnew was to do, he was rather better-qualified than Johnston in that he had played for Hampshire Club & Ground and occasionally fielded twelfth man for the county. He had kept in touch with the dressing-rooms which was a great help in his work behind the scenes to get Basil d'Oliveira accepted firstly into English cricket and thereafter into the MCC touring team.

As to his literary turn, it was always at the service of the listener. I needed to be reminded of the bowler (it was Asif Masood) whose run-up he compared to Groucho Marx pursuing a waitress but the image was conjured up swiftly and surely, as with other deft strokes for other personalities. Was it Arlott who described Hampshire's middle-order batsman Henry Horton as having "a stance like a gate-leg table"?  If it was not, it was someone imitating Arlott. "The single by consent" - where both batsman and fielder know that there is a certain one, but not quite a two, so one strolls the run and the other ambles to the ball - was his, too.

Some idea of the professionalism of those days, the art that conceals art, is conveyed by part of Arlott's contribution to the later Armchair Cricket:

Life in the box is somewhat unnatural. All talk is professional - required to be audible and understandable to the listener. Arrangements about a cup of tea, sugar or not, loan of matches, whether or not to take a 'good-night drink', correction of errors, collecting autographs for juvenile correspondents, whether the 'comments man' may leave the box, what has happened to X - who was due on air three minutes ago - or the report of Johnston's latest pun-atrocity, must be transacted in sign-language, hand-shielded whispers or writing.

Nowadays, it all hangs out. Personally, I enjoy the revelations of the logistics of the commentary box, but not when it gets childish. There is an element of the private school common-room about some of the goings-on which is irritating. This brings me on to another forgotten man: Don Mosey. Brought into test match commentary when Cliff Morgan was head of sport at the BBC, he should have taken over as cricket correspondent when Johnston retired in 1972. He knew it, and did not make any friends by letting it be known that he thought there was a BBC bias against working-class, especially northern working-class, Conservatives. He was a fine commentator, though, and knew his sport.