The temporary chancellor of the exchequer, Sajid Javid, continues to claim that the UK economy is fundamentally strong and will outgrow those of France, Germany and Italy. However, this article by the International Monetary Fund puts those claims in perspective. The first graphic in the article is particularly telling. 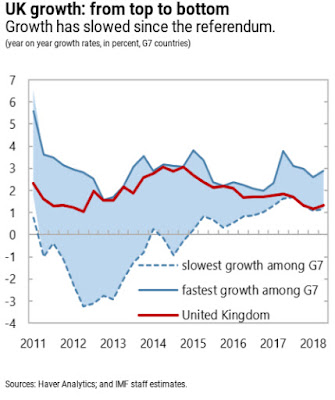 Their analysis from early this year says "Growth has moderated since the 2016 referendum, moving the UK from the top to near the bottom of the Group of Seven growth tables. Private consumption has been constrained by slow growth in real incomes. Business investment — which was affected by expectations of higher trade costs and uncertainty over the terms of the withdrawal from the EU — has been lower than expected given robust global growth and favorable financing conditions."

Since then, one Brexit deadline (March) has been extended only for another (January 2020) to loom, but the IMF's other prediction continues to ring true:

"An exit from the EU without an agreement is the most significant risk to the outlook. Moderate growth of just above 1½ percent is projected for the coming years, conditional on reaching a broad free trade agreement (FTA) with the EU and a smooth Brexit process. There are risks on both sides. On the upside, an agreement with fewer impediments to trade could boost confidence and lead to higher growth. On the downside, reverting to WTO trade rules, even in an orderly manner, would lead to long-run output losses for the UK of around 5 to 8 percent of GDP compared to a no-Brexit scenario. This is because of higher tariff and non-tariff trade barriers, lower migration, and reduced foreign direct investment. A worst-case scenario would be a disorderly exit without a transition period. Such an outcome would lead to a sharp fall in confidence and reversal of capital flows, which would affect asset prices and the value of sterling. Careful preparation and close cooperation between the EU and UK authorities would help mitigate risks to financial stability associated with a potential disorderly Brexit. "

One further thought: the news media - and BBC is not the only culprit - continue to present the UK's economic performance figures in isolation. At best, there are historical comparisons but only with UK's past performance. The British public needs a more realistic picture, setting our economic performance against that of our competitors, the EU as a whole and indeed the global economy.